Outlining.  It was the one thing that always annoyed me about writing.  I absolutely hated it.  I remember the long ago days when I was studying to be a Marine

Biologist, each every research paper that I wrote had to have scientific outline.  Each outline followed the same mundane rules of proper format, proper heading, and et cetera.  In the classes where the professor never checked the outline before the paper was handed in, the outline would be written after my research paper was complete so as to use the final paper as the defining guide.  For the classes where the outline was mandatory to hand before the paper was due, I would find myself in a place of pure and utter hell where I would languish long nights away with my head in my hands sobbing about how to structure some asinine outline.

Outlines annoyed me.  I found them tedious and mundane.  As a professional in Quality Assurance and Regulatory Control, you would think I would revel in the worlds of organized outlines… but you are dead wrong.

I found them completely pointless and detractors from the completion of the finished product.  I never saw the benefit of them.  So when I turned to creative writing, I nixed them.  Outlining was one and only “brainstorming” tool that I never utilized with short story writing.  I brainstormed by drawing diagrams, write down a couple notes, and then start banging at the keys, allowing the story just to flow on the paper.

The days of outlining were dead, and since graduating college I never wrote another one…  until last night. 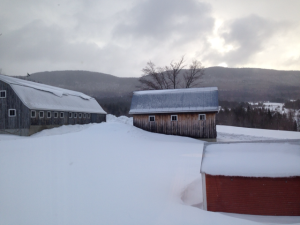 The snowy inspiration of my week at the When Words Count Retreat. (c) Amanda Headlee

As a birthday gift, I treated myself to a writing retreat to help get me on track with my novel.  One of the perks of this retreat is to have a constructive critique from two well-established writers, Steven C. Eisner and Jon Reisfeld, who are the proprietors of the When Words Count Retreat.

One large take away that I received from them, after they critiqued the short story that I am trying to adapt to novel length, is that they both agreed that I needed to first outline the novel.   The outline didn’t have to be the typical, dreary scientific format.  It only has to be what I needed to get my story into the right flow.  In other words, keep it in check.

With a novel, I am finding that it is extremely difficult to get by writing a structured story without an outline.  You need an outline everything on track; characters, plot, settings, the little minute details.  I attempted to write my first novel without an outline and it became so scattered that I threw my first draft in the trash (shredded first, of course).

After the critique last night, I stayed up until 4 am this morning outlining the first few chapters.  Today, I spent another seven hours on the outline.  I am about a quarter of the way through at this point.

Several writer friends have commented that it seems like I plot out my novel in short form before I plug in the details of the setting, characters, and plot.  In a way I do.  However, I like to think of it as more of a checklist.  I can’t move on to the next point until I covered what is in the current point.

As this is my first true, non-academic outline along with my first novel, I am hoping that this scheme works out.

So far I think it will.  My novel has already taken some sharp turns that I had not event planned out.  Turns that I wasn’t even thinking about last night as I was plotting it out into the wee hours of this morning.  Some terrifying turns that, as of this moment, has me wide awake where I will most likely be sleeping with the lights on in my room.

Now, I would like to know how many of you, my readers, outline your works before you begin drafting?  And what is your style?  Do you follow a systematized method or the free-for-all approach?  I personally don’t believe there is a right or wrong answer here.  It is all in what works for you.

Be sure to check in next week, as I will be discussing the benefits of writing retreats.

6 thoughts on “The Drudgery of Outlining”

BaltiCon has gone virtual and panels are free to attend (be supportive and make a donation to help ensure future cons). https://www.balticon.org/wp54/ #balticon54 #virtual #virtualwritingpanels #amwriting #writersofinstagram #writersoffacebook #writersoftwitter
I’m excited to announce that I am a finalist for When Words Count Pitch Week XVII! In June, I will pitch my first horror novel to a group of esteemed judges in a contest where the grand prize is publication. https://whenwordscountretreat.com/meet-the-pitch-week-xvii-finalists/ #onestepclosertoacheivingmydreams #whenwordscountwritersretreat #WWCPitchWeekXVII #horrorauthorsofinstagram
The cat has started to copy the dog... fights are breaking out over prime floor register locations. Who rules this house? #notthehumans #toocoldoutside #cranktheheat
Beautiful day! Worst half marathon time ever... totally worth it because I stopped many times to snap pics of the lovely spring flowers along the Perk trail. Representing the ‘burgh out near Philly. @pghmarathon #MOVEPittsburgh #pittsburghvirtualhalfmarathon #socialdistancingrunning

Wandering and Wondering by Amanda Headlee is licensed under a Creative Commons Attribution-NonCommercial-NoDerivs 3.0 Unported License.