Monsters.  They slink among the trees, hide in the shadows, lurk in caves, and glide underwater while watching, waiting, stalking their prey.  They are born from Gods or from cursed mothers or from the fires that burn within ourselves.  Mythology has it portrayed that these creatures of the weird have a primary goal to overtake humanity.

Monsters have physically haunted this terrestrial plane for many millenniums since the days that lore and legend grew from the first human form of communication.   For it is only through fear that early man understood the nature of danger, and monsters were the depicted as the harbingers of danger.  They were the catalyst to persuade on how to live a good and safe life.  As the tales would go, if one man found himself going against the warnings, then that man might just find themselves dead at the claws of something strange.

In modern day, this trend still continues.  The moral of any good monster story is “Don’t go looking for danger, for if you do, danger will be sure to find you.”  Danger is predatory.  It does not pick and choose its victims.  Whatever person is so unwittingly blind to go against the rules, they will fall prey to that danger.

However, it begs the question to ask who, in this scenario, is the real danger?  Is it the external force, the monster, which would inflict the physical harm?  Or is the person who is out there seeking and beckoning the danger?

In all of the legends and modern tales, it is the monster that kills the human, but no one ever asks the question: Why?  Why would a beast exert such energy to kill a human that it will not eat?  Such actions would lead one to think it is more of a matter of defense.

There are tales in Native American mythology that talks of great horned serpents and fish-monsters that drown humans that forge onto these beasts’ territory.  The lore paints these monsters in a bad light to teach the listener to not swim in the deep water, for if you do, a great horned beast will drown you.  But let us stop for a moment and see the world through the beast’s eyes.  How does humanity look to the “monsters”?  Humans, a strange bi-pedal creature, feel they have the right to encroach on the territory of other animals.  They mercilessly kill and eat other flesh without regard to the soul that they just snuffed out.  They think they own the land.

Maybe it is these actions, this disregard for the balance of nature, which “monsters” fear and are killing humans in pure defense — not out of joy.  These “monsters” that we think are being of the weird are merely living in the same instance as us, and their territories and power should be respected.

However, that being said, out there in the night there are truly evil monsters that roam. Dybbuk, Preta, Wendigo, and the Aswang are just a few creatures with a more ominous nature.  They are not the typical creature-monster like Sasquatch, Nessie, or Godzilla.  These monsters are actually beings which are possessed by an evil spirit.  These creatures truly have an ulterior, sinister motive and their ultimate goal is to feed off the flesh of humans.  Their true power comes from consuming humanity.

With this type monsters, the ones that are actually evil spirits, that is where the true terror lies.  It is not in the benevolent lake creature that may drown a human here or there in an attempt to protect its habitat. No, the most terrifying monster is the one who has been infected by true evil and is looking for human blood. 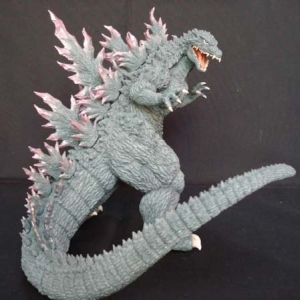 Godzilla was just cranky because someone woke him up from his underwater nap.
(c) photo by 123

2 thoughts on “Here Be Monsters”