In Evora, Portugal exists the Chapel of Bones (or Capela dos Ossos).  The Chapel of Bones is located next to the entrance of the Church of St. Francis.  Upon entering the chapel, it is easy to see why it is called as such:  the interior is decorated with human skulls and bones!

The Chapel of Bones was built in the 16th century during the Countrer-Reformation era by a Franciscan monk.  The monk’s goal of the chapel was to bring light to contemplation that life is a transition from one plane to another.  At the entrance of the cave, above the door, the monk carved: Nós ossos que aqui estamos pelos vossos esperamos (We bones that here await for yours).

There are over 5,000 corpses inside the 18.7 meter long by 11 meter wide chapel.  The remains were brought in from several nearby church cemeteries.  The most haunting corpses within the chapel are that of an intact child and an adult that dangle from ropes as if hung and died on the wall.  Above them is carved:  Melior est die mortis die nativitatis (Better is the day of death than the day of birth)” (Ecclesiastes, 7, 1). 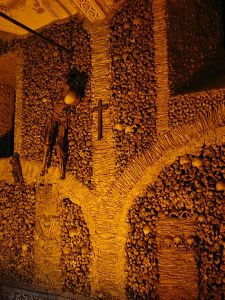 Wall of the Chapel with the two hanging corpses (c) Rotatebot

On a pillar, inside the chapel, in an old wooden frame hanged a poem in attribution to Fr. Antonion Da Ascencao Tele, the parish priest of the St. Francis Church and Chapel of Bones from 1845 – 1848.

(This has been translated by Fr. Carlos A Martins, CC)

Where are you going in such a hurry traveler?

Stop … do not proceed;

You have no greater concern,

Than this one: that on which you focus your sight.

Recall how many have passed from this world,

Reflect on your similar end,

There is good reason to reflect

If only all did the same.

Ponder, you so influenced by fate,

Among the many concerns of the world,

So little do you reflect on death;

If by chance you glance at this place,

Stop … for the sake of your journey,

The more you pause, the further on your journey you will be.

The Chapel of Bones is truly a haunting and macabre place to visit.  However, at the same time it exudes beauty in honoring the transition that occurs between the planes of life and death.

“We bones that here await for yours” (c) Nsandre 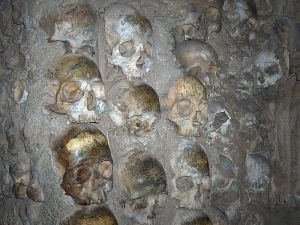