Water is believed to be an elemental conductor in connecting the portal between the living and the dead.  The Mayan civilization worshiped ancient cenotes, a large cave structure that is often filled with water, by prophesying that these Earthen structures are the gateways to the Xibalba, the Mayan version of underworld.  Throughout the Yucatan peninsula, archaeologists have uncovered human and Mayan temple remains in the cenotes.  Specifically within the Las Calaceras cenote, there are more that 125 of human remains found.  To this day, no one is sure whether the people died naturally at the site, the bodies deposited at the site after death, or if the bodies we apart of on-site sacrificial rites.

The afterlife for the Mayans is depicted as a terrifying road where the dead have to pass through rivers of blood, rooms full of sharp knives, and caves full of vicious bats and jaguars.  For the Mayans, the afterlife is a literal “Highway to Hell”.  The cenote cave structure is regarded to be the initial design and concept for the Mayans’ definition of the transition through death.  Therefore, the cenotes were regarded as sacred areas and a direct link to their version of Hell.

For modern day archaeologists and cave explorers, it is easy to understand how the Mayans developed this concept.  The cenotes are deep and dark caves that are connected underneath the Yucatan peninsula.  Some caves are almost completely submerged in water, while other contain an air of something sinister.  Guillermo de Anda, a University of Yucatan archeologist, has been studying the cenote cave structure and history for years.

During his expeditions, he has uncovered cenote rooms that are so packed with stalactites that it is almost impossible to crawl through without being cut.  Other rooms are filled with deep pools, discolored by iron causing the water to look like blood.  Another room is roasting with heat, making explorers sweat, and a following room is frigid cold.  An incredible vast number of bats are known to frequent and inhibit the cave.  Stirring up a swarm that causes the creatures to fly around in a panic is a regular occurrence.  The cave of jaguars has yet to be uncovered, but de Anda has found several caves that contained the remains of jaguars.

It is also interesting to note that several of the larger and most galant Mayan temples are situated on top of some of the more notorious cenotes. As per de Anda:

“There are a number of sites in the lowlands where there are caves right underneath the principal temples, palaces and pyramids, which are thought to represent a religious ‘access mundi,’ where you have the pyramid representing the heavens, and the caves representing the underworld underneath.”

It is a wonder of how a cave system can represent the whole basis of a civilization’s concept of the underworld and afterlife.  It is beautiful as much as it is tragic.  The tragic aspect being in a sense that the caves gave the Mayan the concept of an afterlife, Xibalba, as brutal and hellish.  One has to wonder if the original Mayan who first through up to use these ancient cenotes as an example of Xibalba meant to use this depiction as a sign of power, to oppress the Mayan people with fear. 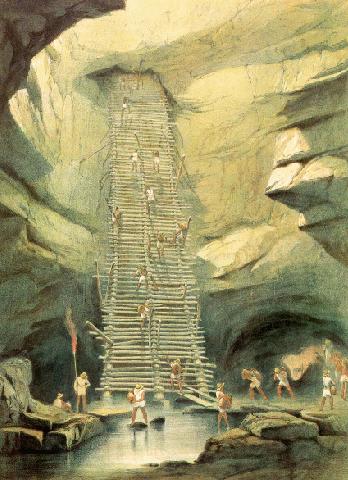 A depiction of Mayans in an ancient cenote.

A cenote entrance or gateway into the underworld? (c) “Mexico Cenotes” by Ekehnel (Emil Kehnel) – Own work. Licensed under Creative Commons Attribution 3.0 via Wikimedia Common

So proud of this guy!
Repost @deathcomeslifting 🔮🎙🦇 Spend your #SabbathSunday with The Lifting Dead Army! 🎙🔮🦇 Check out or latest PODCAST with Horror Author @amandaheadlee , one of the smartest people we’ve ever had on here. ✍️💀
Welcome home, Sprout! This little lady came to live with me today in her “furever” home.
Happy New Year!!🍾There will be several fun things to come this year— writing & personal wise. But none of it can be shared…yet. It’s going to be a busy and fulfilling year!